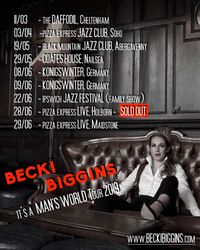 'It’s a Man’s World' is a new project by Grammy-Nominated Jazz Singer and Songwriter Becki Biggins. Inspired by blues and gospel music (arriving at gospel-tinged jazz pop) Becki has paired up with Hammond maestro John-Paul Gard to bring old songs to new audiences; material is inspired, written and made famous by men, with songs by Billy Joel, Glen Campbell, Elvis and Frank Sinatra, as well as fitting originals by Becki herself.